a variety of Quinoa and rice combinations of pure delight! 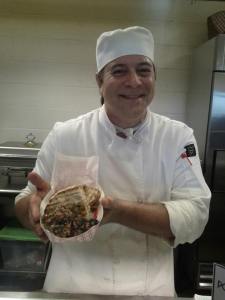 This is the man responsible for my happiness on weekends

I have been part of the Dayton Hate parade for half of my life and it has taken someone very special in my life to bring my adoptive home under a new light.  I had to realign how I saw this Midwestern city by deciding to stop calling it a city. It’s simply not a fair comparison; it gets placed into a category completely outside its league.  Paris, Madrid, Chicago, New York, Cincinnati, Pittsburgh, New Orleans; those are cities.  They can survive comparisons to one another, but Dayton? Dayton is a big town.  And with that realignment Dayton became one of the best towns in the world!  Local breweries and passionate foodies abound in this big town!  Places like the Dayton Beer Co., Lily’s Bistro, Olive, Salar, even our food trucks like Zombie Dogz and Harvest scream recognition and deserve respect.

This is the Greek Freak, a maddening creation by the minds of Zombie Dogz 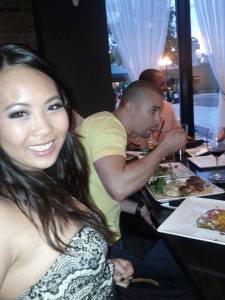 out for a night with my Gym buddies at Salar, which can best be described as Peruvian Fusion, if I am even using that word correctly 😉 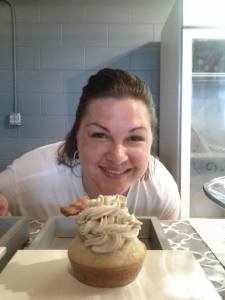 This is the creative mind behind Sweet Nothings, a cake shop! She does amazing work with Toffee and this particular creation, Pancake Bacon Caramel Syrup cupcake. Yes all those things in one bite and I LOVED it.

In the last few months I have made friends at 2nd Street Farmers Market where amazing local farmers are flippin’ the bird at Big AG and growing amazing food which people love and buy.  We have women who make such wonderful cheese at the Blue Jacket Dairy.  I am particularly taken by their grilling cheese which you can sample as you pass by.  I am also addicted to The Chef’s Case, where the Chef Joe Fish has made the meanest, tastiest Paninis I have had the pleasure of munching on this side of the Atlantic.  He also has an impressive Quinoa salad selection which drives me bonkers for more.  All these restaurants and food joints deserve their own post devoted to each and every one of them but I am sure you get the point.  Dayton has stuff going on.  My long stint in the Dayton Hate parade happened because I was strictly limiting myself to the suburbs  where life is admittedly boring, filled with restaurant chains and too few people going out on a limb willing to try some cool food.  Not to throw the ‘burbs completely under the bus, Bill’s donuts in Centerville and Nelly’s Bolivian Chicken in Miamisburg justify a shout out.  But it’s nothing like downtown Dayton, where this community of people wanting something better for themselves, for their friends and family is noticeably thriving.